The benchmarked scale scores were created using item parameters based on a Rasch model. The data used in the analysis were from about 100 schools across the nation that administered the EDSCLS and voluntarily shared their data with the U.S. Department of Education. The data includes completed student, instructional staff, and noninstructional staff data collections. Please note, the parent/guardian survey is not designed to produce scale scores. Due to the brevity of the survey, parent/guardian data should be examined at only the item level.

Before creating the benchmarked scale scores, individuals’ EDSCLS scale scores were centered at 300, within a range of 100 to 500, by trimming scores at the 4th or 5th standard deviation for the staff and student surveys, respectively. This psychometric benchmarking fixes the cut scores at 300 and 400 for the points separating levels 1 and 2, and levels 2 and 3, respectively. In order to maintain the full spectrum of the variation, the individual scores are not trimmed within the range of 100 to 500. However, for consistency and ease of understanding in the EDSCLS platform reporting, the aggregate scale scores are reported in the range of 100 to 500.

For more information for how the benchmarks were created, see the Benchmark Report.

The aggregate scale scores are categorized into the following three benchmarked performance levels:

In order to improve perceptions around school climate overall, and especially for sub-groups of respondents, we encourage users to access the School Climate Improvement Data Interpretation Resources. (These resources are currently being updated to reflect the new benchmarked scale scores.)

If you have raw data from previous administration(s), you can either:


If you do not have raw data from previous administration(s) and need to measure data trends, contact the EDSCLS Help Desk at EDSCLS@air.org or 866-730-6735.

Changes to the Nonistructional Staff Survey

NENVINS141: Staff at this school expect students to do their best all the time. The item was dropped because no respondents provided a “Strongly Disagree” response.

The survey has a similar item in terms of wording and the response distribution (NENVINS140: Staff at this school feel that it is a part of their job to prepare students to succeed in college).

Changes to the VM Platform 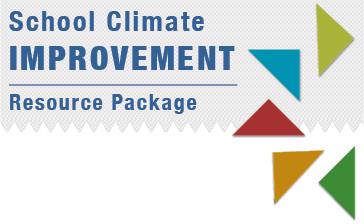