Runaway and homeless youths—male, female, and transgender—are at particularly high risk for becoming victims, though some trafficked youths continue living at home and attending school. There is also a strong correlation between sexually exploited youths and childhood sexual abuse, chronic maltreatment and neglect, and otherwise unstable home environments. Research findings estimate that between 33 and 90 percent of victims of commercial child sexual exploitation have experienced these types of abuses.3 Evidence also suggests that lesbian, gay, bisexual, or transgender (LGBTQ) youths can be up to five times more likely than heterosexual youths to be victims of trafficking due to the increased susceptibility that comes with the feelings of rejection and alienation that are often experienced by LGBTQ youths.4

Possible risk factors associated with child trafficking include the following:

Social workers who provide services to these victims indicate that feelings of isolation and abandonment are often reported but that the lack of a support network increases the vulnerability to trafficking. It is important to note that many teenage girls may be at risk of being recruited into the commercial sex industry simply by virtue of their normal maturation process. Wanting to take risks, feeling misunderstood by parents, and seeking romantic relationships can increase girls’ susceptibility to the recruitment tactics of sex traffickers or pimps. Findings also suggest that low self-esteem accompanies school failure for girls, and the resulting sense of a lack of self-worth may make them more vulnerable to recruitment.5

However, once a student is victimized, identifying him or her can prove difficult for a variety of reasons: (1) the student’s reluctance to disclose the problem due to a sense of shame and fear; (2) the stigma associated with forced prostitution; (3) the power and control of the trafficker’s seduction and manipulation; and (4) the student’s inability to recognize that he or she is a victim and, therefore, is unwilling to seek help.

Possible behavioral indicators of a child sex trafficking victim include, but are not limited to, the following:

Additional behavioral indicators for labor trafficking include the following:

4 U.S. Department of Health and Human Services, Administration for Children, Youth and Families. (2014). Guidance to states and services on addressing human trafficking of children and youth in the United States. Washington, DC: Author. Available at http://www.acf.hhs.gov/sites/default/files/cb/acyf_human_trafficking_guidance.pdf

5 U.S. Department of Health and Human Services, Office of the Assistant Secretary for Planning and Evaluation. (2009). Human trafficking into and within the United States: A review of the literature. Washington, DC: Author. Available at http://aspe.hhs.gov/hsp/07/humantrafficking/litrev/ 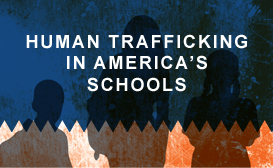