Middle/High School is the phase of children’s education and development, usually representing grades 6 through 12, defined by adolescence, including a desire for increasing independence.

In addition to providing an academic curricula, effective middle schools focus on social/emotional development, life skills and engagement.  And effective high schools provide support to enhance cognitive skills, engagement and the promotion of leadership.  A special focus of high schools is also to prepare students for their transition to post secondary education, vocational/education training, and initial entrance into the world of work.

Schools play an important role in identifying students who are at risk.

Students ages 12–18 are likely to have physical complaints when under stress, and they may be less interested in schoolwork or other responsibilities that they previously handled. Although some students may compete vigorously for attention from teachers, they also may withdraw; resist authority; become disruptive or aggressive at home or in the classroom, which may manifest as bullying-type behavior; or begin to experiment with high-risk behaviors, such as alcohol or drug use.

Transition from middle school to high school is a critical phase for all students.

Cognato, C. A. (1999, October). The effects of transition activities on adolescent self-perception and academic achievement during the progression from eighth to ninth grade. Paper presented at the annual meeting of the National Middle School Association, Orlando.

Offers school and district administrators and staff a framework and roadmap for adopting a trauma-sensitive approach school- or districtwide. The Training Package includes a variety of resources for educating school staff about trauma and trauma-sensitive practices and for providing school leaders with a step-by-step process for implementing a universal, trauma-informed approach using package materials.

The Power of the Adolescent Brain

Reviews adolescent brain development and how it affects learning, health, and behavior. It features Dr. Frances Jensen of the University of Pennsylvania’s Perelman School of Medicine. Drawing on clinical experience and research, and inspired by her personal experience parenting two teenage boys, Dr. Jensen shares what is known about adolescent brain development, functioning and capacity.

Skipping to Nowhere: Students Share Their Views About Missing School
Summarizes a survey of American middle and high school students who were missing school and asks them why they skip and what they perceive the consequences to be.

Dives deep into nine years of school tragedies, and it advocates for schools to establish comprehensive targeted violence prevention programs. Provides prevention measures to identify students of concern and assess their potential risk for engaging in violence or other harmful activities.

Out of School Off Track: The Overuse of Suspensions in American Middle and High Schools

Provides an analysis of data from districts on the number of students suspended just once during the school year and the number suspended more than once via the U.S. Department of Education’s Office for Civil Rights (OCR) data collection.

Teaches how to help prevent and address technology related incidents by building a cooperative relationship with schools. This free resource helps schools with the steps of incident management, such as fact-finding, documentation, reporting and engaging the appropriate school officials and other stakeholders. Through collaboration with law enforcement and the use of this tool, schools can plan and prepare an effective and appropriate response to all types of technology related incidents, including cyberbullying, sexting, hacking, and threats of violence.

Resource for teaching and learning to use real-life Census Bureau data through school visits and other modes of outreach. The program is broken out into five core subjects: math, geography, sociology, English and history. Each of these subjects are clearly designated for K-12 grade-level appropriateness.

States that the U.S. Department of Justice and the U.S. Department of Education have withdrawn statements of policy and guidance regarding the Nondiscriminatory Administration of School Discipline, dated January 8, 2014, and related documents dated 2014, including the Guiding Principles. (Note: Previously posted School Discipline Guidance Package related materials posted on the former SSDCoP website are being revisited; the website will be updated on an ongoing basis.) 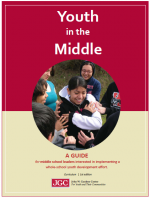 Building Supportive Relationships As A Foundation for Learning, from Youth in the Middle

Presents a guide for middle school leaders that describes four work areas central to developing a whole-school youth development approach based on one school's process. The guide describes preliminary evidence of progress, and includes hyperlinks to tools that can be adapted to support similar efforts in other settings.

WAS THIS PAGE HELPFUL?